Recently, the launch party for the family-friendly movie Boonie Bears: The Big Shrink, which will hit theaters on the first day of Chinese New Year (February 16, 2018), was held in Beijing. Leading creators of the movie made a collective appearance and officially announced the simultaneous opening of the nationwide pre-sale and advance screening. At the launch event, Chinese and foreign stars included the movie’s “Overseas Promotion Ambassador” who plays “Caroline” on the U.S. TV show 2 Broke Girls, Beth Behrs, and Yingjun Zhao, who showed up as “Logger Vick” for the first time, and the singer of the theme song, Kewei Yu (Yisa Yu), all showed up on stage with surprises for the audience. Together with Briar,Bramble, and Logger Vick, they presented the Boonie Bears “Spring Festival Global Gala” and extended their early New Year greetings to the audiences. 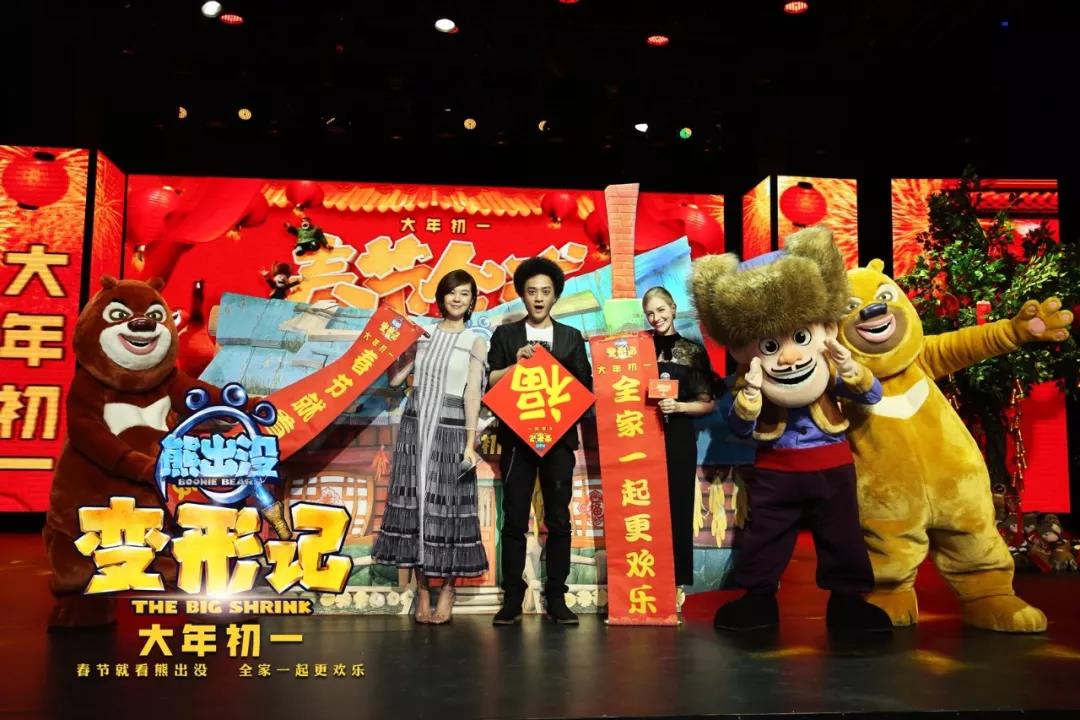 In addition, the ending theme song from the movie “世上只有爸爸好” (“Father Is the Best in the World”), composed by Yingjun Zhao, also made its debut at the launch event. By depicting the heartfelt story between Vick and his father, it touched on the audiences’ emotions and gratitude to their own families. The launch event featuring Boonie Bears “Spring Festival Global Gala” heats up this family-friendly animated movie which contains spring festival elements and loads of fun.

At this moment, the nationwide presale of the movie has officially began.The advance screenings start from January 27.

Calls On Parents to Accompany Their Children

At the launch event, our main characters from the movie ‘Briar and Bramble’ made a surprise appearance, and presented a “report card” of Boonie Bears of the past few years:since its first release in 2014, The Boonie Bears movie series has created one after another new box office records, and quickly broke multiple records for Chinese animated movies. With an accumulative box office of over 210 million USD across 4 movies, Boonie Bears has become one of the most successful animated IPs in China. The launch event also shows the improvement of the movies in every aspect. As the fifth movie in the ‘Boonie Bears’ movie series,“BoonieBears: The Big Shrink” has had an all-round upgrade in terms of content as well as production. 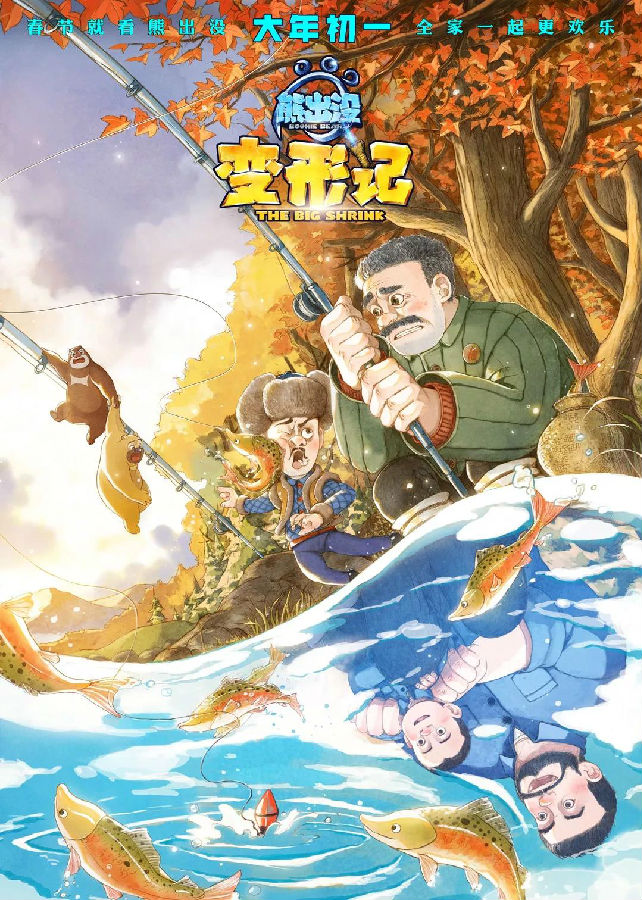 Directors Leon Ding and Huida Lin introduced the innovation and breakthroughs of the movie at the event: in the film, a lack of fatherly love during Vick’s childhood causes their father/son relationship to hit rock bottom. After Vick grows up, his father’s effort to make up and reconcile things brings nothing but misunderstandings, making the broken relationship even more difficultto restore… This is exactly one of the characteristics of Chinese-style father/sonrelationship, but also, something that resonates with fathers and sons from any culture. The director makes this “father and son relationship” the main theme of the movie, hoping to encourage families to pay attention to the importance of a father’s love and company during the growth of children. This also embodies the “family” bond concept that ‘BoonieBears’has been emphasizing since the beginning. 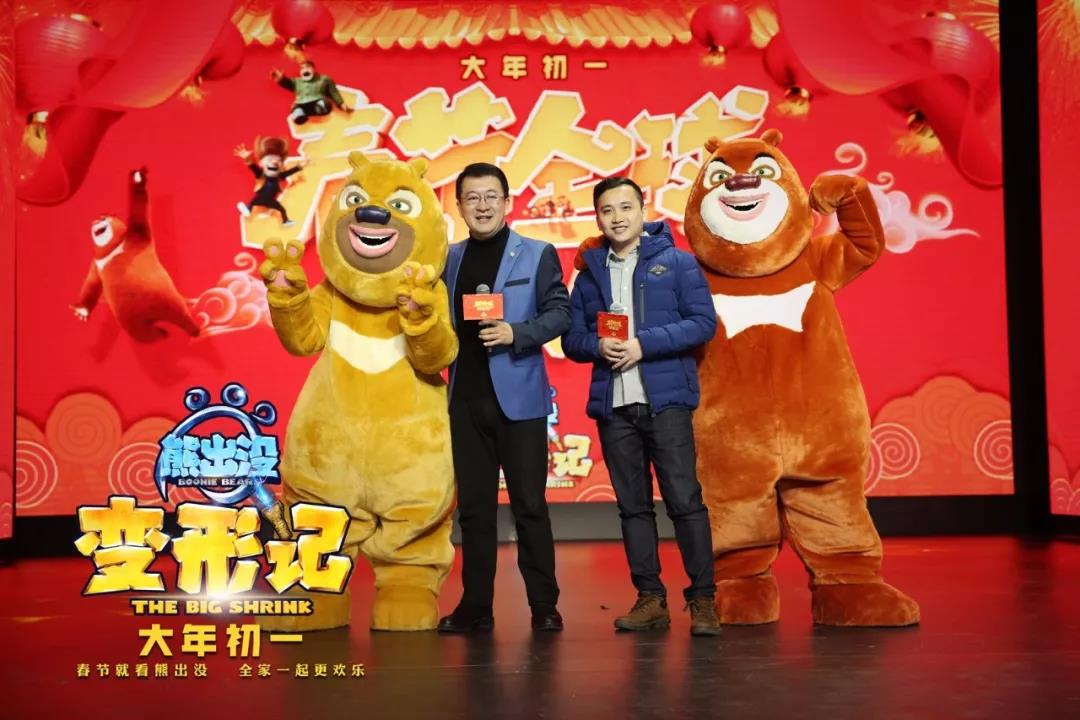 The movie also presents a fascinating glimpse down into the micro world: First,when a bunch of tiny “new friends” are introduced, the crayfish gang, who go on an adventure with Briar and Bramble; Secondly, the micro world itself is a ton of fun: a four-leaf clover forest that rises like skyscrapers high up into theclouds, a huge hungry frog, a tiny city crisis deep in the sewer… And of course Briar, Bramble, and Vick who shrink and find themselves unexpectedly on a thrilling journey in the micro world.

Following the main characters’ point of view, the audiences will also travel along in the tiny world and uncover a mystery concerning environmental protection. Facing a major crisis and saving the environment with the main characters… this again ties back into the core theme of ‘the Boonie Bears’ brand, “environmental protection” as Briar and Bramble always say, “Protecting theForest, The Bear Brothers Way!”

Moreover, the director commented that this movie will be the “funniest” thus far, among the existing ‘Boonie Bears’ movie series. Many hilarious parts will not only make the children laugh, but their parents as well. “The Movie is the best choice for families to have a fun and relaxing time during spring festival”.

Listen to the Touching Homecoming Song In Advance

In terms of the cast lineup, it is ‘Boonie Bears’first time inviting a renowned and famous Hollywood actress to join one of its movies,which also represents the internationalization of the Boonie Bears. The launch event invited Beth Behrs, who plays an animated version of herself in the movie. The pictures comparing herself and the animated version were also shown at the event. How a real person turns into a vivid animated figure brought an exciting visual experience to the audiences, who wereall very impressed and look forward to the movie.

During the event, Beth also sent her New Year’s wishes to the Chinese audiences in an authentic Chinese style. She not only learned the Spring Festival’s traditions and gave her wishes inChinese, but also learned to do the Yangko dance. Her lively and lovable performance also fit the joyful tone of “Boonie Bears: TheBig Shrink” quite well. 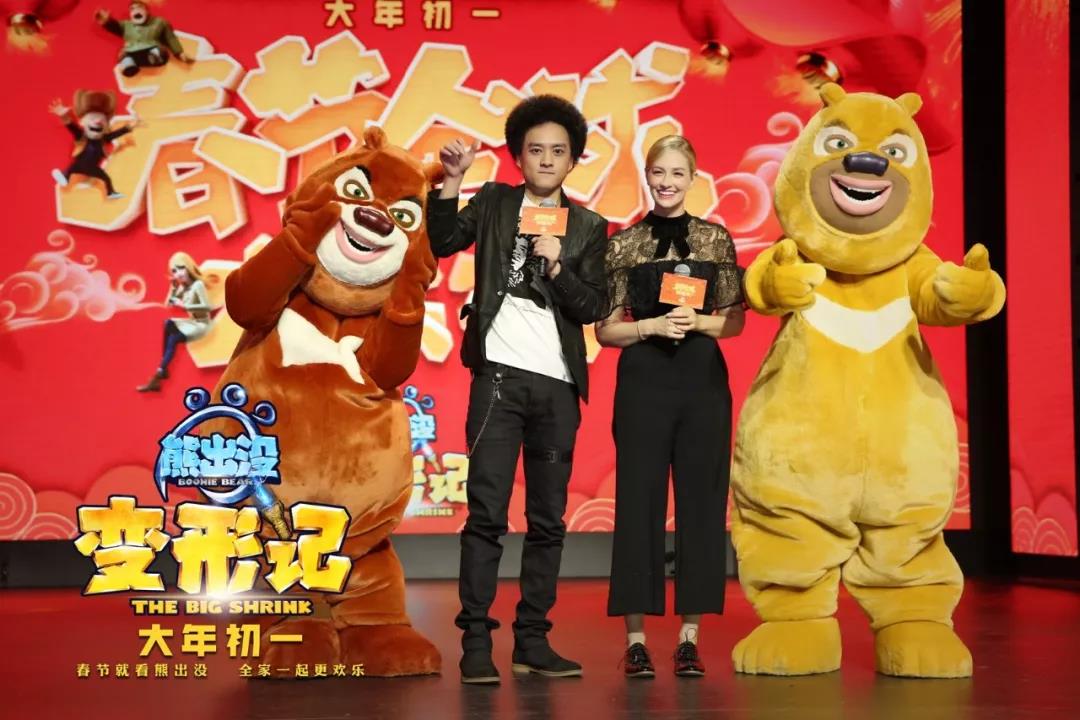 When asked the reason why she joined Boonie Bears: The Big Shrink, Beth shared that: first of all, she had heard about Boonie Bears before, knowing that it is a very popular and family-friendly animation brand in China. She said that it was a great honor to be invited to join the movie; second, there’re many similarities between the character and Beth herself. They both are “environmentalists” who love to interact with nature. Beth also told us that “this is one of my favorite characters in the movie”; meanwhile, she also showed her love for ‘Boonie Bears: The Big Shrink’ by saying“The Boonie Bears over Spring Festival are fun for the whole family!” inChinese. 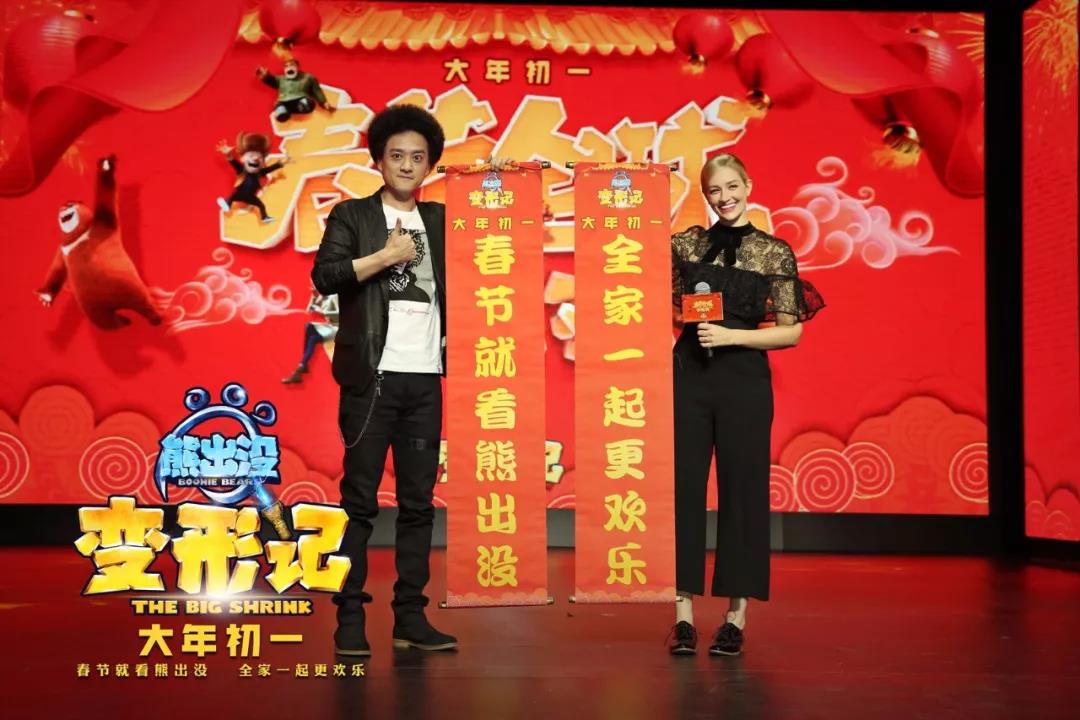 Later at the launch event, Kewei Yu (Yisa Yu), singer of the theme song, who was unannounced previously showed up as a pleasant surprise and sent early New Year’s wishes to the audiences. The theme of the song is familial affection and reunion. When talking about the reason for performing in Boonie Bears:The Big Shrink this time, Yisa said that it was out of the recognition of the movie, “I’ve long wanted to sing for a good animation, so I was more than happy to oblige when I finally got the invitation”. Moreover, the audience will feel a connection to this touching homecoming song. “I hope people can go home and reunite with their families when they hear the song”. At the event, Yisa sang and shared a small part of the song for the first time, which was enough to create an atmosphere of reunion that the movie brings to audiences, igniting their hopes and longings for the coming Spring Festival. The official version of the song will be released inearly February so then audiences can listen and enjoy to their hearts’ content. 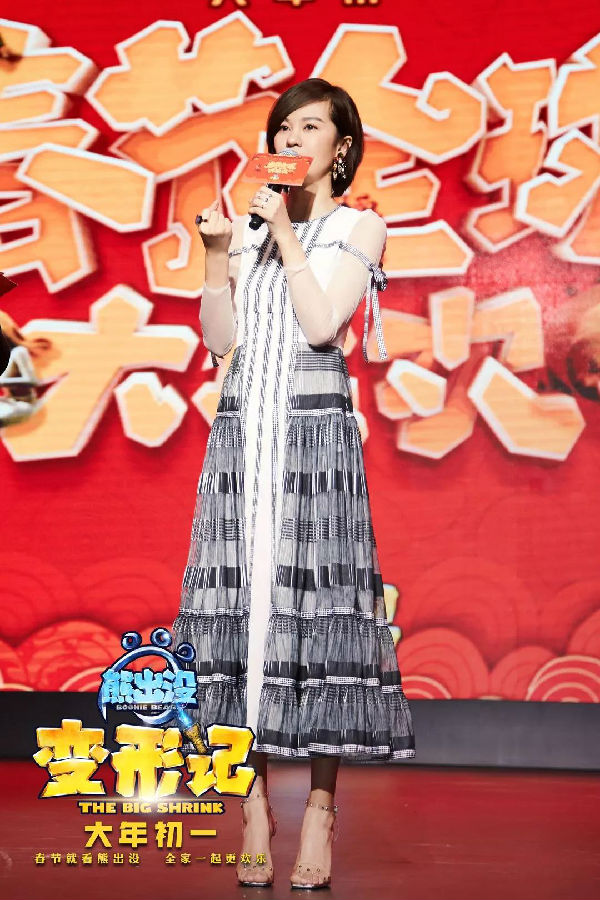 Real “Vick” Himself Showed Up

“FatherIs the Best in the World” Justifies the Role of Father

The ending songof Boonie Bears: The Big Shrink, “FatherIs the Best in the World”, which is created and sang by Yingjun Zhao, is also released on the same day. At the event, Yingjun Zhao showed up in Vick’s iconic costume with a vest and an ushanka, and was one of the highlights of the event.Actually, Yingjun Zhao got the title “the real Vick” long before, but this is his first time gaining the “official certification” from the Boonie Bears themselves. The director even commented: “This is my first time seeing Yingjun Zhao in real life. I’m shocked. How could our Vick become a real person standing right in front of me?” Yingjun Zhao himself also joked that “I will be the first one in line if the director ever wants to shoot a live action version. I can’t let Cun Xue(another singer who looks like Vick) take my role.”

The ending song “Father Is the Best in the World” was written from a first person point of view. It presents the changes of a child’s emotions toward the father during different stages, which can make people tear up easily.

During childhood, the father in their children’s eyes, “doesn’t have so many hugs (for them)” but also “has so much work”, which inevitably creates a sense of estrangement; as children grow inage and mind, they start to understand the burden their “strict father” takes in life. At the end of the song, the lines “Please run slower, time. Don’t let him grow old.” conveys the children’s deep affection toward their father. “Father Is the Best in the World” is a great contrast to

Yingjun Zhao also shared his story of creating this song, that he got the idea from the emotional story of Vick and his father in ‘BoonieBears: The Big Shrink’ from inseparable to misunderstanding, and then back to reconciliation. It can be seen from the MV of the song that Vick is inseparable from his dad during his childhood, and a conflict rises between them accumulated due to Vick’s father’s working hard during Vick’s teenage years,then Vick’s father tries to make up for his “faults” in the way that he thinks is best after Vick has grown up, which leads to the outbreak of their conflict…how Vick and his father eventually settle their dispute is a very big part of the movie.

Boonie Bears: The Big Shrink will be released on the first day of Chinese New Year,which will bring a warm and happy viewing experience to the audience during the Spring Festival. It is announced that there will be an advanced screening of the movie since January 27th. At the present moment, the bookings for the advanced screening and presale tickets have already started nationwide simultaneously. The audiences can get their tickets on ticketing platforms.

Watch “Boonie Bears” on the first dayof the New Year! It is fun for the whole family over this Spring Festival!